Home » Economics » Economic Alchemy » Money – What is it? 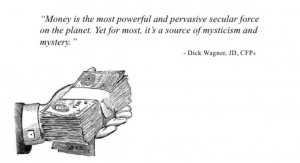 Without appropriately defining terms, any serious discussion about money is open to misinterpretation and misunderstanding.  These definitions may be familiar to you, and will be used in these “Economic Alchemy” discussions.

Money is a human invention originally created as a representation of the quantification of value for the purpose of facilitating trade.

The ideal attributes of money are:

Throughout time societies have chosen various things (instruments) as money.  For Example: shells and stones, various grains, salt, coins of various metals, printed notes and bills, and numbers on a computer screen.  No monetary instrument, past and present, has been able to satisfy all these attributes.

There are two degrees of separation between the value of things and money:

Much of the problems the world is experiencing with money has been with the manipulation of the “Numbers”.  But because we normally see money as directly representing the value of things (that is one degree of separation), we find it difficult to understand the money / value relationship.

Any  group of people wishing to trade could agree on an instrument to use as a common medium of exchange.  This agreement could be by mutual consent or by legal decree.  Mutual consent is where everyone in the group agrees to the instrument being used as money.  Legal decree usually occurs where the instrument (usually coins and notes) are legislated and created through the government or central bank and the instrument’s value is enforced by law.

Money has a denomination printed or stamped on it, indicating the units of account it represents.  Weighing grain or salt served the same purpose in earlier times.

Inflation reduces the purchasing power of money, requiring more money to purchase the same amount of goods and service in the future.  Commodity items used as money such as gold, grain or salt can fluctuate in value due to external situations.  Items that are susceptible to inflation or fluctuations over time are not stable.  The US dollar has lost about 97% of it’s value since 1900 in relation to gold.

Money is easy to carry and transport.  In modern times things are much easier where we carry the value of money in our debit and credit cards.

Money does not wear out, breakup, disintegrate or decompose.

Money can be divided into different denominations without any change of value.  For example a single $100 bill, five $20 bills and twenty $5 bills all represent the same value.

A dollar in your hand is worth the same as a dollar in my hand.

It is impossible to debase, forge or counterfeit money.

Currency is simply the money of a country.

All the money that has been and is in existence falls under into one of the following types:

A short fable (which somewhat matches history) tells about the evolution of money.

A long time ago, Mr. Goldsmith observed people people using gold and silver as mediums of exchange.  This was much better than bartering, or using other commodities like salt, shells or stones.  However without an accurate scale and assaying ability, the amount of gold in a trade often was in question.  Being an astute enterprising man, Mr. Goldsmith realized that trade would be a lot easier if gold was standardized in weigh and purity.  Mr. Goldsmith started minting coins in various denominations with guaranteed purity.  These coins were very attractive to traders who gladly exchanged their gold for the gold coins.  Mr Goldsmith had created a new revenue stream for himself, charging for the service of minting the coins.

The easy to use gold coins were also vulnerable to theft.  People new that Mr. Goldsmith had a securely guarded vault, and for a small fee, stored their money there.  Thus creating another revenue stream for Mr. Goldsmith.  Mr. Goldsmith issued deposit receipts (effectively claim checks or I.O.U.’s) to the people for the gold stored in the vault.  The bearer of the deposit receipt could always redeem the amount of gold specified on the receipt.  Soon people started using deposit receipts as a medium of exchange.  These receipts were “as good as gold”.

Mr. Goldsmith, also had a loan business division, where he lent gold charging interest.  As receipt money came into acceptance borrowers began asking for their loans in the form of receipt money rather than gold.  There was an implied relationship that the receipt money issued as debt was backed by the same representative amount of gold in Mr Goldsmith’s vault.

Mr Goldsmith noticed that depositors very seldom redeemed their gold, and he was holding much more depositor’s gold than his own.  He reasoned he could earn a whole lot more interest, if he also issued deposit receipt to borrowers against his depositors’ gold.  Although duplicitous (2 gold receipts issued against the same gold), the rewards greatly outweighed the risks.  To cover his risk, he took steps to ensure the credit worthiness of his borrowers and that he had small reserves set aside for loans that defaulted and depositors wishing to withdraw their gold.  His depositors were none the wiser.  Thus the evolution of deposit receipts into fractional money.

The depositors insisted they get a cut of the interest that Mr Goldsmith was charging borrowers rather than paying a fee for the safe keeping of their gold.  This worked out quite well for Mr Goldsmith, who could have been mauled by the depositors.  Although he was earning less net income on depositors’ gold, he gained access to more gold from depositors by paying them interest for their deposits.  This outcome may appear more fair, but it also makes the depositors accomplices to Mr. Goldsmith’s deception.  Both the depositors and borrowers still have deposit receipts in hand for the same physical gold.

Mr Goldsmith had created the first bank, paying a lower interest on the deposits of other peoples’ money and lending the money at higher interest to borrowers.  The difference in the interest received and interest paid, covered Mr. Goldsmith’s operating costs and profits.

The more Mr. Goldsmith’s wealth grew, the more he wanted and the more more brazen he became.  Demand for credit was increasing as the world was becoming industrialized and Europe spread out across the world.  Mr. Goldsmith’s bank continued issuing deposit receipts as interest bearing debt against nothing.  He reasoned that so long as all the deposit receipt holders did not come to the vault to redeem their gold at the same time, no one would be any the wiser.  All this debt being issued backed by nothing continued to reduced the fractional reserve of the bank until it all but vanished.

Being burned by the run on Mr. Goldsmith’s bank, the people lost confidence in banks and bankers. This could have been a good time to outlaw the practice of creating money from nothing.  But because the success of the European continental expansion needed the volumes of credit the banks were extending, governments intervened legalizing and regulating the banks.  This is still the current state of play in most of the banking world.